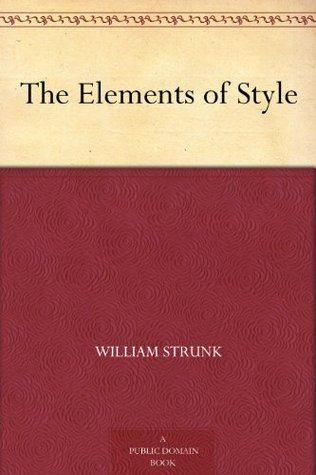 The Elements of Style by William Strunk Jr.
My rating: 3 of 5 stars

Read on Kindle, though it must have been an older .pdf.

This is the ‘How to Win Friends and Influence People’ of literature, prose and written expression: at first glance it smells musty and sounds like outdated advice, but there’s tons of valuable information and suggestions therein. It does have to be said that its true value will only be revealed to one who can have the critical capacity to separate what’s useful and still applicable today from the obviously or not-so-obviously antiquated. To be honest, I most enjoyed the tips on style itself and the author’s rather well-disguised playful cheekiness.

I can recommend this book to anyone interested in expressing themselves in writing, preferably in English, even though this book also has tips that could be used to improve one’s clarity, accuracy and succinctness when writing in any language. Also recommended to linguists or curious people interested in the evolution of “correct” English language in the 20th century.