The Last Hours of Ancient Sunlight: The Fate of the World and What We Can Do Before It’s Too Late by Thom Hartmann
My rating: 5 of 5 stars

I found out about this book through Conversation with God 3 which I “read” in audiobook form. It was recommended as a really important book to read by the words of God him/herself through the writer Neale Donald Walsch (I’m fully aware of how corny this sounds but I just don’t care because Conversation with God is just so amazingly good) and just by hearing the utterance of the title I knew it would be something special.

Then, one year later, I found out my father’s wife actually had it. It was sitting half-read in her bookcase in Aegina for more than a decade. I promptly borrowed it from her, complete with underlined passages with “!!” jotted down on the sides.

This book basically says that everything around us, especially life forms and organic matter, is literally sunlight – energy that comes to Earth from the our precious sun and is stored in varying densities in the form of plants, animals and yes, humans: we’re made out of sunlight (link to an excerpt from the book that discusses this part in beautiful detail). So what is ancient sunlight? Condensed, conserved sunlight in finite amounts that had been trapped in the ground for millions of years: oil and fossil fuels.

The last hours of ancient sunlight is our time. It’s the period in humanity’s lifecycle when we realize as a species that the whole foundation of our great modern civilization is based on a limited resource; that everything we’re so proud of can be attributed to a very sudden rise in available energy, directly comparable to the “extra food” that leads to a population boom of bacteria in a petri dish or in yesterday’s pasta, or of cats in an environment were humans deposit up to 50% of our food production in specially designed vessels.

This is basically what it boils down to: 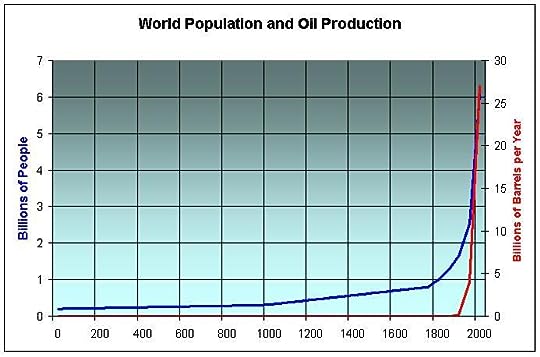 Ancient sunlight and other sources of cheap energy have fueled our expansion. Soon we’re going to run out, and our population will dwindle to a number which won’t need extra food, or ancient sunlight, in order to be sustainable. But of course there’s a long, painful way to go until that day comes, and no-one can guarantee that a sustainable population of humans will actually exceed zero.

This book, then, is split into three parts:

1. The part where it tells the story of exactly how deep in the shit we are.

2. The part where it makes the distinction between our Younger Culture, which has existed ever since civilization created scarcity and vice versa, and Older Cultures, whose existence was/is based on sustainability and “making decisions with the well-being of up to seven future generations in mind”.

3. The part where he goes over what’s actually possible to do “before it’s too late” if we want to change things. Spoiler alert: it’s not solar power, it’s not a revolution, and it’s not colonizing Mars.

The first part is the one with the “!!” marked by Vasso on the sides of the pages. It was shocking, worrying and depressing, but it was incredibly concise – presented in a way that made me feel hopeful just by the fact that there was someone out there who had written about these things so clearly. So lovingly. It felt like warm sunlight shining over me. It also felt like I was standing waist-deep in industrial waste, but at least it was a clear, beautiful day…

The second part, which went on anthropological and historical forays, was also amazingly done. Sometimes it did feel as if it was romanticizing the “noble savage” concept a bit too much, grouping together whole bunches of tribes and peoples like it did, but the premise actually made sense, so perhaps I was seeing a “noble savage” caricature just because I was expecting to see one. Older Cultures were just masters of sustainability and had been around for much, much longer than the Younger Cultures that destroyed them – it’s just a matter of fact.

Some may be quick to point out that that is how evolution and “Darwinism” works and that our greedy, unsustainable Younger Culture has actually “won” by annihilating all that was weaker than itself… but, pray tell, do cancer cells or tumors “win” at the game of evolution by spreading to a different organ of their host’s body?

The third part, where Mr. Hartmann went on “what we can do before it’s too late”… This book’s first edition was first published in 1997. Perhaps there was still some hope left back then that the culture could change before the point of “too late” had been crossed.

Alas, one look around you is enough to see that, whatever the point of no return used to be, we’re way past it now. True, the point of no return has this nasty habit of also changing like a moving goalpost, and “too late” (for what, I wonder?) tends to always be around one decade into the future. Still, it would be far from unreasonable to think that perhaps it never was anything but “too late” – in fact, the only useful question I can think of regarding this topic is what we do with the knowledge that it’s too late. Right now, the most popular way of handling it is depression and indifference, but once we stop grieving over the loss of our feelings of entitlement to perpetual abundance, or that growth is something self-evident and unquestionably good (a painstakingly constructed illusion at any rate), then we might start moving in interesting and creative directions.

That said, if we’re going to look into survival, we better return to the Old Culture way of looking at sustainability: making sure that not only we or our children have everything we need to live a happy, fulfilled life, but also that our descendants 7 generations down the line will have the “luxury” of choosing a fulfilled life over a terrible one. What that would constitute is a difficult discussion, but that’s precisely the point: it shouldn’t be.

My only qualm with the third part is that it goes into American politics and tries to hammer across the point of just how bad the Republicans are. It seemed to presuppose that the reader was American and I found that this detracted from the still-fresh quality of the rest of the book.

That is probably though my only qualm with The Last Hours of Ancient Sunlight. Mr. Hartmann displayed through this work his unique and enviable talent of writing clearly while being scientific and citing sources, but without being restrained by science by refusing to talk about things outside of it. He used this talent to write an amazing book that just might help you change your life, and hopefully, by extension, the future of humanity. God from CwG was right: it really is a very important book.

The afterword by Neale Donald Walsch starts with this phrase:
You have just read one of the most important books you will ever read in your life. And because you have gotten this far in this extraordinary book, you are one of the Crucial Ones. You are one of the people who will play a key role in co-creating our future on this planet. You may not have thought of yourself in that role, but if you’ve gotten this far in this book, you’ve been given it.

Yes. You should read it.