The monitor I’ve been using since 2008 which I bought along with Cuberick and had had my 360 hooked up to had been acting weird the past few years. Every time I’d turn it on it would flicker and I’d have to turn it off and on again twice per minute or so before it would finally flicker to stability usually 5-10 minutes later. A few days ago it failed to turn on completely. I thought I’d try to locate the problem and attempt to repair it. Cue some Youtube research, and lo and behold: my problem turned out very common – and very easy to fix, at least compared to how complex I’ve been imagining working with electronics to be.

Namely, multiple (five!) capacitors on the power controller chip were blown; a result of policies corporations like Samsung follow where they use the cheapest components possible to reduce costs and enforce planned obsolescence, a two-birds-with-one-stone type of deal for the manufacturers and against consumers the world over.

Replacing them together with buying some necessary equipment for soldering and borrowing an actual soldering iron set me back less than 10€.

Now my 9-year-old 22″ monitor that doesn’t have an HDMI-in works like new. I put in some extra time but I came out fulfilled, richer in terms of knowledge and with something that will hopefully last some more years to come – probably more than what VGA cables will still be around for.

If you have the same problem, here’s the video that got me started. My monitor’s model is Samsung 2232BW.

In late June – that’s already 2 months now, frack! – I got myself a new laptop with the money I got from my father’s insurance company as a reward for managing to not die before turning 25 or something to that effect. It’s a lot less than what I should have got,  given the amount of money my father had been paying every year for me to be entitled to this. Even the sum itself, while indeed the same numerically as the one in the original contract, is worth much less today because of the beautiful human construct called inflation, a fact which I’m sure my insurance company, and all insurance companies everywhere since forever for that matter, must have preciously kept in mind before sealing the deal. Still. Still! This boost isn’t enough for me to do everything I ever wanted (that costs money), but it’s enough to do at least some of those things (that cost money), or indeed, individually, anything I ever wanted, apart from maybe owning land, a car, or a sailing boat. My wishes aren’t so costly anyway. Thanks dad.

So, the time of choices was – and still is – upon me. The first one I made was, as I mentioned in the first sentence, to buy a new laptop. My cheap old Acer served me well for the 5 years I had it and now I transferred it to Zanda, who’s been out of a computer almost since we got here in Sofia. She’s been taking good care of the little grandpa, including surprisingly taming his overheating, random-restarting temper by simply cleaning him a little bit with a paintbrush, so I can now safely assume he’s in good hands.

Back to my own new laptop. After 4-5 days of furious googling, redditing and reading reviews, comparing prices, all the things you do when you’re itching to invest on any shiny new piece of tech and that have utterly transformed in unfathomable ways how consumers exercise their right and obligation of being  good citizens, I made my decision: the best available bang for the buck and the best fit for my needs, namely the ability to play not-so-demanding games decently (you know, the weird ones I like), longevity – i.e not having to buy another laptop for another 5 years or even more if I can make it – and to have a desktop replacement, since 1) who knows where I’ll end up next year or the one after the next? and 2) Cuberick is getting old, even after I upgraded him a few years back. His GFX card has been the same since early 2008, for one thing…

Many thoughts went through my mind before I made my decision (duh). I had a lot of doubts about buying something so expensive, perhaps the single most expensive thing I ever bought with my own money. “Should I get a used laptop instead? How big of a difference will paying more now make in the long run, after the novelty has worn off? Will the extra €100 or so for the model with the “significantly” better graphics card also make a difference, when this new digital companion won’t be that good in playing games anyway?” As a person who tries to be against over-consumption and for simplicity, frugality and smart buys, and as one who, truth be told, hasn’t stuck to these ideals as of late, I had such mini-anxieties before taking the big step. At the end I went along the line of reasoning that dictates that important tools excuse lavish spending. Maybe.

This is the laptop: the ASUS N56JR-S4078D. Notebook review link – the only difference with the S4078H model in that review is that mine has a keyboard in English/Cyrillic; perfect for learning  and typing in Bulgarian and – why not? – one day Russian. Here’s a good topic containing discussion on this model.

I got it from pcstore.bg, which was the only retailer in Bulgaria who actually had it in stock at the time. I checked to see if it was available anywhere in Greece, but surprisingly it appeared that no models of the N56 line had been made available from ASUS in the county. Hah! I own something that doesn’t exist in Greece!

For all its good points, the model didn’t have an SSD, something I’d been dying to get my hands on. Instead it had a Blu-Ray writer! I got a 120GB Samsung SSD for it and replaced the optical drive with that. I also got a USB enclosure for the removed optical drive. It feels super-neat having a small external device capable of reading and writing on pretty much every optical medium, but I’ll probably hardly ever use it. Optical simply faded away and nobody shed a tear…

All things accounted for, I paid 1958lv for it. That would have translated into less than 1000€ if Alpha Bank hadn’t screwed me over with their extortionate exchange rate from euro to leva, so I had to pay more or less 60€ extra for the luxury of moving money from my Greek account to pcstore.bg’s Bulgarian account. #$&@*! I At least I got some feelings of compensation from the sweet Razer messenger laptop bag pcstore.bg was giving away with every purchase of this particular laptop model. I might not have played Dragon Age II, nor do I plan to, but who cares? Actually, now that I looked up that link to Razer’s site for the bag, I’m disappointed that it wasn’t the Mass Effect II or the Starcraft II variation – hey, what’s up with the sequels? *shakes head violently* No, no. I got this bag for free. No complaints, kay?

Here’s a review of the laptop, linking to other reviews by the same guy:

And here’s a picture from the first time I turned it on: 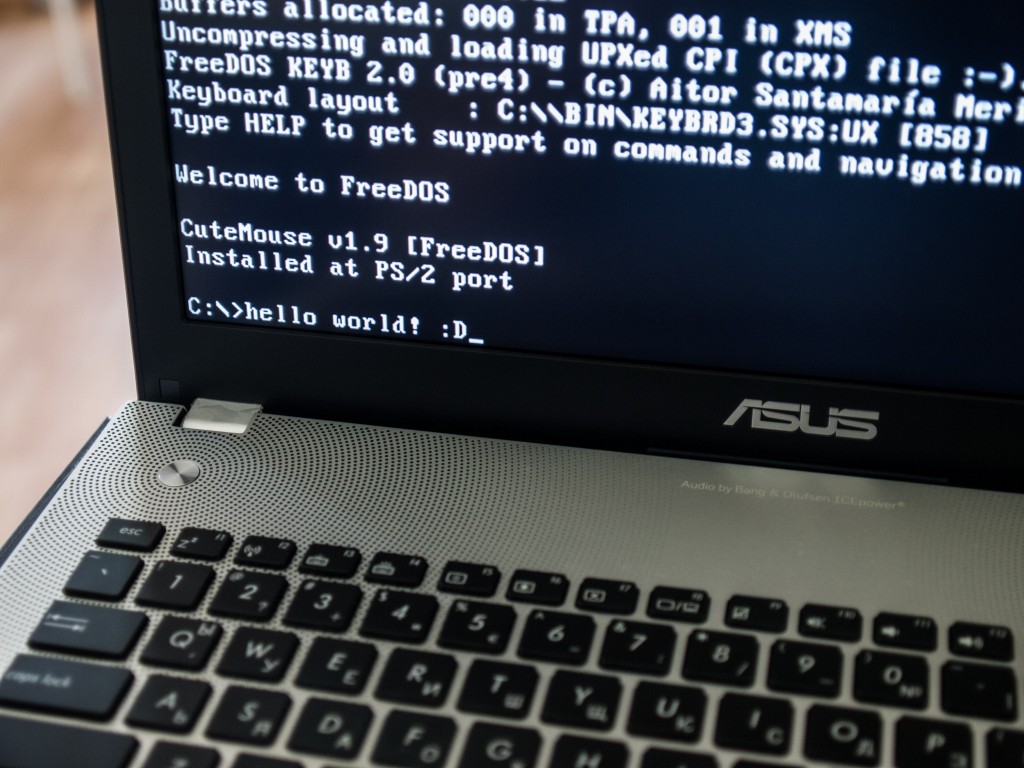 And here begins the point of this post. The moment I opened the box and got my hands on this beauty, I wanted the above video review to be done by me. I love the black keys over the polished aluminium – I’ve already confused Macbook Pros with N56s on-screen; Daphne had to correct me when we were watching Utopia. I felt so special for owning this thing. I wanted to make videos showing all the little bits, pieces and magic, take pictures, share the excitement! Meanwhile, I was careful not to leave fingerprints anywhere; I cleaned the screen meticulously (me?! Amazing, right?) or thought twice before installing any program (still do). I wanted to leave it in as a pristine condition as possible.

I wanted to write this post ever since I got my spanking new N56JR. But then life happened for a bit and I was too busy. Frankly, the more weeks passed, the less I had an idea of what to write about. Little by little, my enthusiasm was diminishing and I was starting to look at my new possession for its pure utilitarian value, the way you always do with stuff, no less according to Heidegger and what he said about the difference between things being ready-to-hand and present-at-hand. I’m showing off here, BTW: I don’t really know much about dead German philosophers, or any philosophers for that matter, but especially about dead German philosophers; I just remember what I studied of his theories from when I was doing my Heidegger and Haiku paper. To put it differently, there is a fundamental difference of interaction between when you notice your tool and when you just use it. I’m slowly going into the latter stage, of just using the tool.

It’s another reason I posted a “long term” review above (and was pleasantly surprised to come across one); I can see that reviewing something when you’ve just plucked it from the box must be very different from reviewing it after you’ve had it for a while. Yet, there’s unboxing videos combined with “reviews” everywhere on YouTube. Another German philosopher put it very eloquently: fetishising of commodities. Hell, I’ll be damned if I haven’t used the word sexy for plastic things that work on batteries other than your typical sex shop’s inventory.

So what’s so special about that, about my new tool? What warrants this post? I started reasoning that nobody would care about my new laptop. Why would you? I mean, I would probably not care if you bought a new laptop. Why should I? Big deal, it’s a laptop. Ya like it? Goodonya mate. Happy you’re happy.

It’s just a laptop. We might be loving it today, but tomorrow we’ll be tired of it, the day after we’ll be cursing at it and not taking good care of it and then one day we’ll be happily chucking it. Or giving it to Zanda. Anyway, even if we give it to Zanda, its final destination will inevitably be this place: 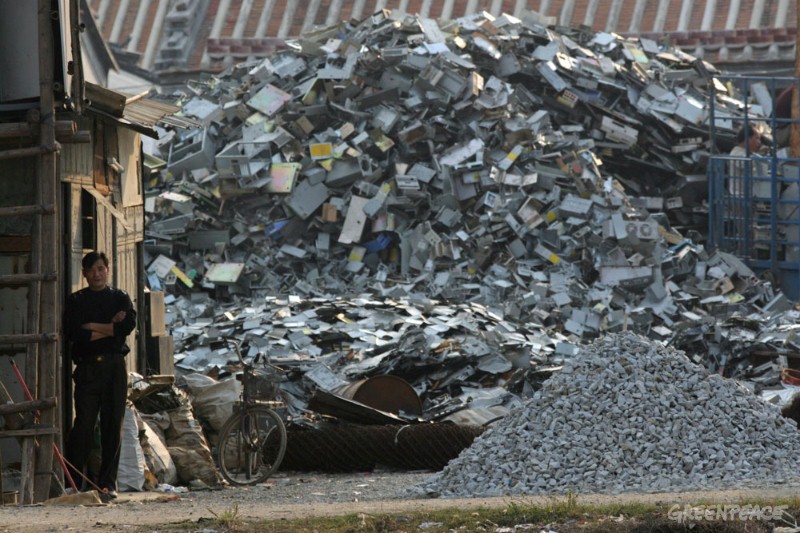 We’re like this with everything we buy, but especially electronics. I would be very happy if I could get a laptop that would last me 10 or 20 years, the way things used to be, before growth at any cost became the name of the game. Okay, perhaps growth has been the name of the game for far longer than since whenever the first consumer appliances reared their digital faces. But it used to be the case that things just lasted! They were made for it. Are you aware of the Lightbulb Conspiracy? Or good old Story of Stuff?

I don’t believe perpetual “progress” expressed in better specs in the field of consumer electronics , such as which forces you to always need to buy the new model of iPhone, console, laptop or digital camera, is as benign, healthy, or even necessary as it’s made out to be. Far from it. What if progress meant sustainability, reduced waste in production, replaceable and recyclable parts? I would gladly sacrifice my laptop’s power if it meant that I would still be able to use it effectively in 2025. I just contradicted myself, didn’t I? Frack it.

To end this rant, I love my new laptop. It works well and I feel good using it. I enjoyed writing about it and I enjoy writing on it. I would recommend it.

But I also felt guilty enough to write this post.