Pink Floyd’s A Saucerful of Secrets, and especially Celestial Voices (the part that starts after 07:00), as it was recorded live by the original band itself, is nowhere to be found on Youtube anymore; their corporate representatives seem to be taking good care of wiping clean all traces of humanity from their facade. They made sure that a wordless hymn to the sequence of birth, each person’s battle in life, death and the lamentation that such a thing as death even exists, was something to be excluded from the band’s catalogue online. All that is available now is cover versions, plenty of them, some not so bad, but most not even close to this one live recording from 1969 that bests them all.

Even the entire album Ummagumma is there on their official channel, apart from a single song: that one 12-minute track which has been made conspicuously unavailable.

I can’t fathom what the reasons for keeping this masterpiece from the general public in terms of profit could be, but one thing is for certain: it does stand out.

A song that feels like floating belly-up on the sun’s rays themselves. Dedicated to Whole Light.

Such a pale light
Such a long night
Pick up that key
Don’t drop your gaze in your coffee
Is it me?
Do I look beautiful in the half light? 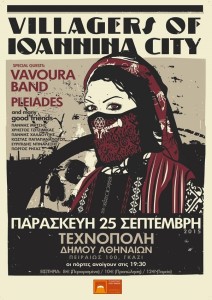 Athens from Roger Waters on Vimeo.

Yes, another Porcupine Tree related post. The craze continues, excuse me while I kiss the quills. Ouch. Nevermind that.

The ‘Tree played in Thessaloniki last night. The setlist was the same as in Athens.

Except instead of The Circle of Manias and The Seance, they played the 15-minute version of Even Less, The Start of Something Beautiful and The Sound of Muzak. AND because they were playing with no Anathema, the ticket cost just a mere €20! ARGH!

OK I’ll just go listen to Buying New Soul to calm down a bit! I’ve got studying to do and only 1 hour or something to do it in!

I’ve been listening to Porcupine Tree since 2004. I wasn’t even 16 years old then. My first contact with them was by listening to The Sky Moves Sideways… It was just right for me then: I was a developing Floyd fan and I could really relate with their sound as it was when they (him? Porcupine Tree was little more than Steven Wilson’s pet band that early) did it, their prog rock side shining through… It didn’t take long for me to listen to In Absentia in all its glory as well, and a few months later their newest album, Deadwing, was released. And then I started actively following them.

It was July 2005 when they played in Lycabettus Theater together with Blackfield and Van Der Graaf Generator, under a full moon. Back then, they had played 9 songs; some of them I didn’t know. I was there with my friend George. Porcupine Tree hadn’t grown enough on me for me to truly have a great time but I liked it nonetheless. I was a fledgling rocker anyhow (I consider myself a fledgling rocker even today).

It took Porcupine Tree another 5 years to re-visit Greece and Athens. Within those years, there’s been great change inside of me. I was 16 back then, I’m 21 today, that’s obvious enough… But I feel that whatever I like about Porcupine Tree grew up with me as well, it matured. The years passed and I loved them more and more. Their music accompanied me through times happy, sad, hard and carefree. It inspired me, mystified me. Fear of a Blank Planet and The Incident came out within those years and I was there to celebrate. These guys’ music even served as my initial common ground with Maaike and anything that relationship, quotes or no, ever symbolised or tought me. To summarise: Within 6 short years, Porcupine Tree developed into my favourite band.

So of course it was a special moment when I learned that they would be coming this year and what a surprise: they’d be playing in Technopolis, one of the coolest places in central Athens. So the months passed and the night came! I left the day before yesterday from Mytilini to be here in Athens on time for the concert and I’m leaving again for my beloved little island town tonight. ~24 hours worth of hanging around ship interiors, studying and reading The Drawing of The Three. I could honestly take twice as much for what I experienced yesterday. And on my own was great. Neni, of course, in one of her usual bouts of derangement decided not to take the opportunity to even come to the concert on her own, let alone with me. Not that I cared in the end: I was able to take it all in with no distractions in my head. What can I say? Her loss. That’s the least I can say.

The ‘Tree gave a fantastic performance. I wish I could be at the railing but I was just half a meter behind! I would have managed to be at the railing if not for a few friends that I met and gave the extra ticket to, but I didn’t mind at the end, we had a good time after the concert! 😉

So! What did they play?

Right when they came out and started playing Occam’s Razor, at one of the pauses it seemed as if there was something wrong with Steven’s guitar, which might actually have been the case. But he just made it look as if it was just dramatic idling. It was suspenseful! And then of course came The Blind House.

Open Car in last night’s show had a brand new breakdown! We were all ecstatic, looking at eachother in crazy disbelief. Check it out in this video that, strangely, has not been taken down. 2:10 marks the spot.

I’m getting feelings I’m hiding too well
(Bury the horse shaped shell) [wtf man? :P]
Something broke inside my stomach
I let the pieces lie just where they fell
(Being with you is hell)

Russia on Ice together with Anesthetize? What an inspiration! Steven did a trick where he played his chords by just kind of slapping the strings there. It was impressive!

I didn’t expect to like the 2nd part of The Incident, that is, the songs after Time Flies, but the band managed to give them some kind of energy that was absent on the recording. I liked that…

After they finished their standard setlist with Way Out of Here and Sleep Together, they left the stage. I always find encores funny, how the artists just leave the stage like that. It’s as if they’re saying “Klain” to everyone! 😀 Anyway, they came back of course and Steven said: “We have some of the older songs for you tonight…” He had already mentioned it at the beginning, but it was really happening! And we were all like: “what might they have in store for us tonight?”, you could smell the anticipation in the air. We hoped their guilt for leaving us with no Porcupine Tree for 5 years would be enough for them to do something special, at least they sounded guilty when Steven said “we hope you haven’t forgot us” or something to that extent… And it begun with Stars Die.

And here’s your proof, the best quality I did find… The song took me back to when I had first listened to PT. It was one of the first songs of theirs that I had come to love. And I remember Giorgos, an old friend of mine, telling me he’d told a girl he was hitting on, drunk of course: “Stars die, stars die…” I dedicate this memory to him. 🙂 Incidentally (pun unintended), he was the one that introduced me to Porcupine Tree. Cheers mate. We need to talk more.

And then came Blackest Eyes and Trains (Fanis would have gone wild with this one). I’ll leave the following do the talking. By the way, you can listen to me cheering and making happy noises and remarks at least at 2:07 and 4:14, that ETSI REEEE!! must be me… I’m not sure! I was somewhere around there. Also notice, at the end of the concert, how Gavin does his magic trick (hard to see on the video) and Richard produces a suitable sound effect and Colin took out his video camera and recorded the whole scene, including the wild crowd (that’s us)! Yeah! I can’t imagine the guys just sitting in a couch, watching crowd videos from the tour and making funny comments. I would actually pay money for such a deep behind-the-scenes.

EDIT!: THEY DELETED IT! THESE ASSHOLES! I CAN’T BELIEVE IT… :'( YOU’RE NOT EARNING ANY RESPECT OR FANS FOR THIS, YOU KNOW…

I sung every song at the top of my voice. I headbanged and rocked with my whole body. I got lost in memories and created even better ones at this concert. I had the chance to see them live again and it was awesome. Gavin is the best drummer alive, Richard is a master of atmosphere, I’d like to have Colin’s coolness and bass guitar skills, and Steven is a bare-foot musical genius with incredible live energy and style. John Wesley, their guest guitarist and backing vocalist for the tour, melted girls’ hearts yesterday in addition to playing superbly… Thanks for a great show, at a great place, with great music.

Have a look at their older setlists in Athens, however, and tell me how awesome it must have been to see them play stuff off Lightbulb Sun, for example…

SEE YOU NEXT YEAR!

Oh, Anathema also played… Meh… These are the songs they played, they really weren’t anything special in my opinion. Don’t know their old songs, of course, nor did I catch them at their hayday.

Maybe not all that much has changed after all… has it? 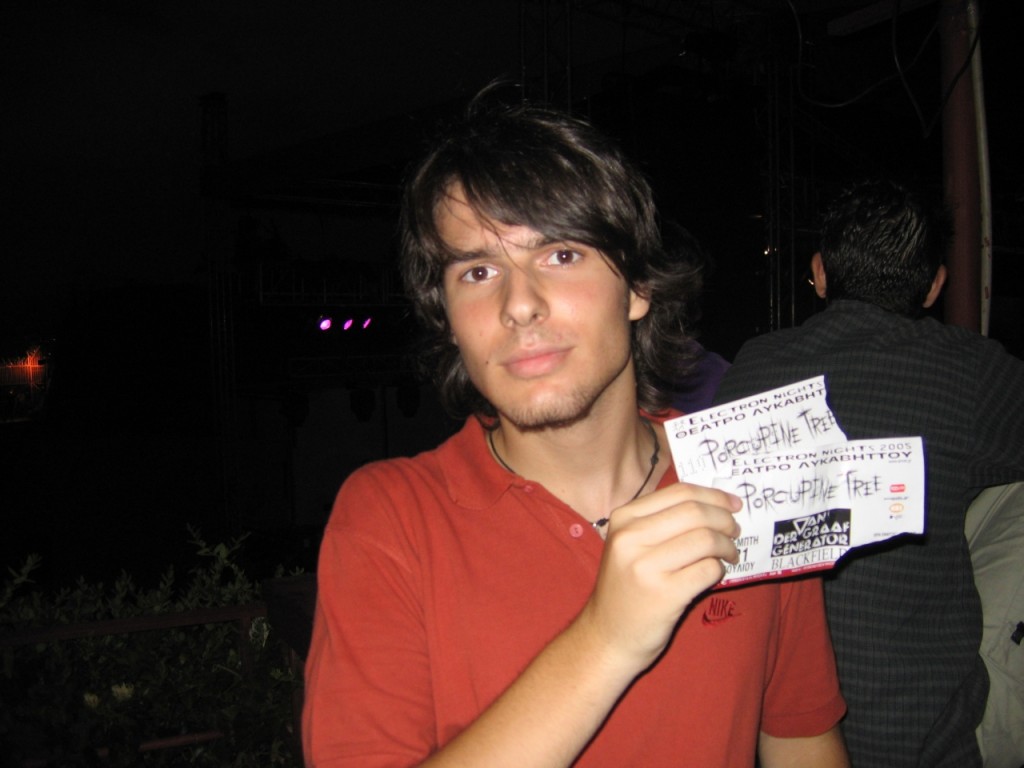 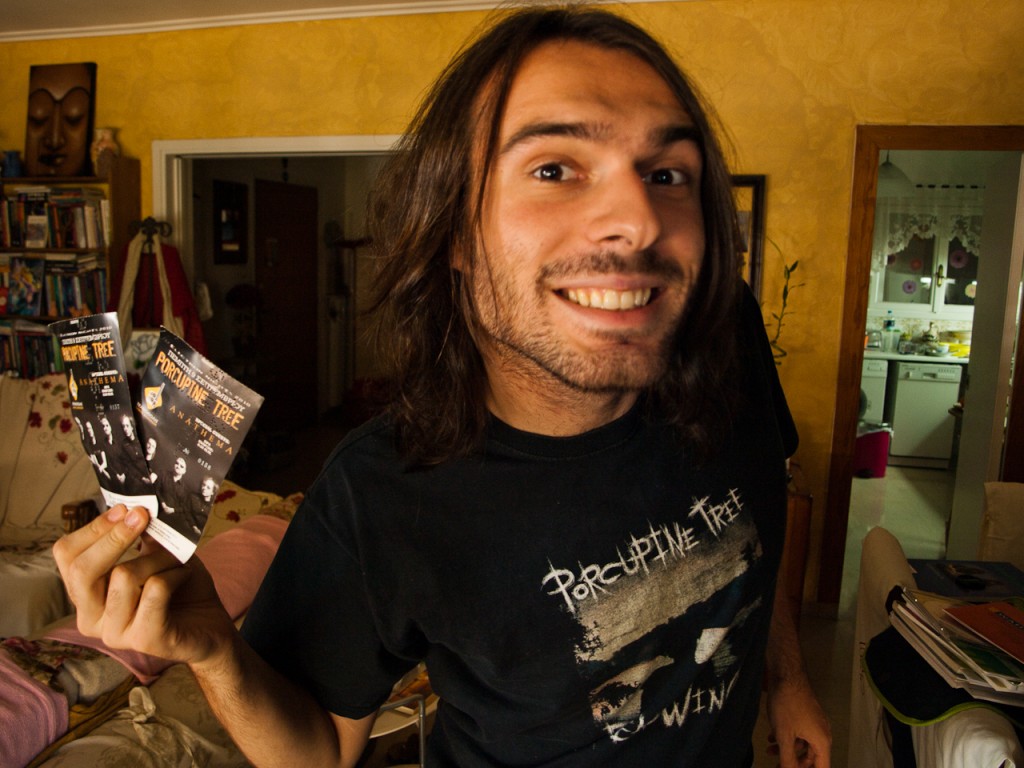 It was a special moment when I heard the radio announcer on 105.5fm I was listening to with Neni utter the magic words… “Porcupine Tree will be playing together with Anathema in Gazi Technopolis [incredible selection of venue!] on September 9th. Pre-ordering of tickets has begun”. It was an almost… orgasmic experience.

That was about 3 weeks ago. Back then, I had no money and could do nothing about it. The minute I got my monthly allowance though, I immediately ordered one ticket for me and one for Neni (it was her nameday present… I was a bad boyfriend and hadn’t bought anything for her. I think this little gift did nicely!), so we, as ticket numbers 157/158, will know where we’re going to be come September 9th. It’s going to be exam period, we know… But come now, honestly, what’s more important?

Good chance to get to know Anathema’s music as well…