I finally did another B&W film some days ago; it had been sitting in my fridge looking at me for far too long. I hadn’t touched my vat, chemicals and spools in almost three years, either, film and developer sitting there with an expiration date years before even then.

It was after the Spotters Weekend was over, which is where I had spent the majority of the roll. I had just a couple left to round off the complete thirty-six plus the one or two extras at the end and couldn’t think of what to shoot last to get done with it. I took a couple of selfies and prepared my developing gear.

I was sitting there in my bathroom, all sources of light blocked, tools “arranged” in front of me – or, if you prefer honest descriptions, lying around in a way I had to feel around for them every time I needed to switch one. I started by trying to, as you would, unwind the film onto the spool which would be used as its case to neatly bathe it into the developer, but I just couldn’t get the roll to fit in right. Something jammed, the film wouldn’t be picked up by the lever and it wouldn’t unwind. I must have been struggling there blind for what must have been more than 45 minutes for something that in the hands of someone who “knows what they’re doing” wouldn’t take more than 5 at most.

By that time, I could feel that I had almost ruined the edge of the film and the last pictures of the roll by all the bending and creasing I had submitted it to. I knew that force wouldn’t cut it (I could fit some pun here if I tried hard enough), but I was getting a tiny bit desperate.

I considered bailing: turning on the bathroom light and instantly burning the pictures white with light forever. At least that way I would escape that limbo between art and frustration, sitting there in the darkness getting nowhere.

If you’re waiting for some dramatic turn of events, there wasn’t one, but indeed it was a turn that saved me. I just tried twisting half the spool while holding it vertically instead of horizontally, and that somehow did the trick. Relieved, I winded the film into the spool, placed it into the tank, turned on the lights and proceeded with development.

A few hours later, this turned out to be the last shot of the roll. 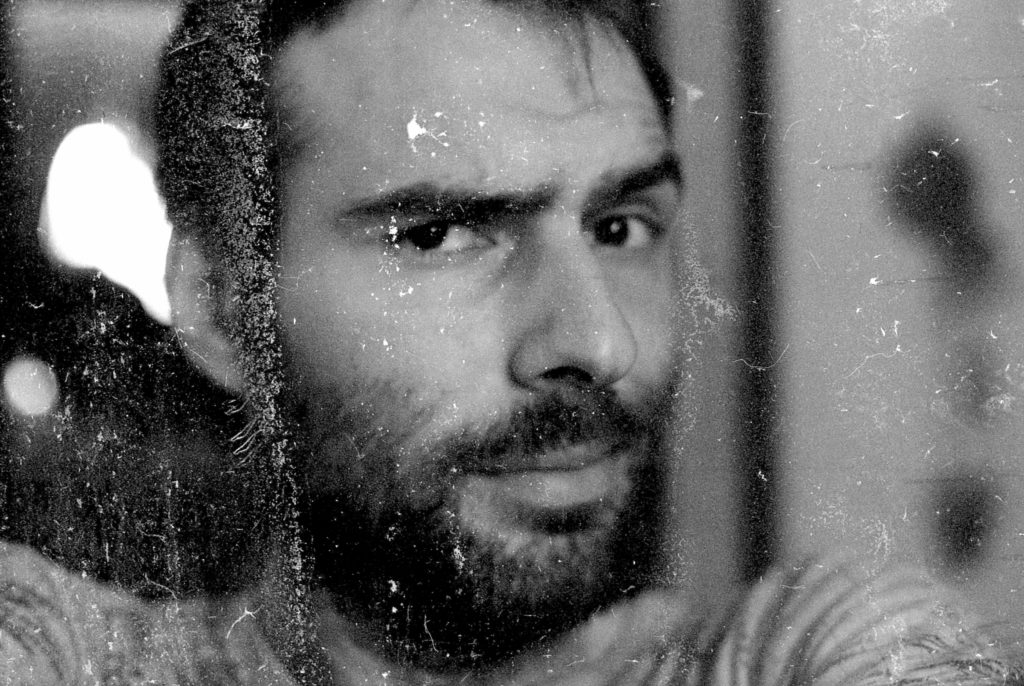 I’ll admit I’m quite happy with how I look in this picture, but what I love are the chaotic, random little blemishes that pepper it from my mishandling it. Together they make for quite a unique selfie, and a selfie it is alright, clumsy self-inflicted marks and all. It just wouldn’t be the same if it had come out “perfect”. In  fact, the way it’s come out (just look at the right of my head, the contour of the… what is that anyway?) I think it is superior* in every way apart from visual fidelity I suppose.

At the very least it’s a happy accident. In chaos we trust – which is just The Flow dressed up in its cool black suede suit.

Some more highlights from that roll, in case you’re interested.

*Film photography is, in my mind at least, being slowly relegated to what painting and drawing turned into after film photography itself was invented: an art form formerly used for picture perfection now rendered obsolete by some newer technology – in this case digital photography. You could say that painting was liberated and all kinds of artistic breakthroughs were had only after photography was invented and artists didn’t have to portray their subjects in any kind of technically immaculate way anymore – that would be the photographer’s job from then on. Similarly, free from the requirement that it should mainly display things “the way they really are” – we have phones and mirrorless cameras now for that – film photography can now be safely re-examined as a separate medium with its own specific physical limitations and artistic advantages. Like painting.