Lately, I’ve been coming to grips with the realisation that my primary gaming nostalgia channel is auditory. In my mind, I don’t really miss playing old games as much as listening to them, as much as I can figure out from my various sessions of sitting down, replaying my old favourites and losing interest usually within 15 minutes or so. Neither do the graphics throw me back as much as the music! It seems to me that game soundtracks, unlike gameplay or visuals, never quite grow old or dated, no matter how old they are. Same goes with films, which share some common structural and thematic elements with games when it comes to how they implement their soundtracks—you should absolutely try Memrise’s Film Score with Audio course, then you’ll see what I mean.

When the first wisps of inspiration for writing this post came through, what I was intending to do was post a little something about Shovel Knight and Shantae and the Pirate’s Curse, which I’ve been playing on and off on my 3DS. I was kind of at a loss how to go about it though: they’re not bad games, in fact Shovel Knight delivers what it set out to do quite masterfully, but I didn’t feel as if I really had anything special to say about them… apart from the fact that they’re funny and they both have great soundtracks.

What I didn’t know at the time and found out quite randomly was that Jake Kaufman wrote the soundtrack for them both. Common thread detected, keyboard inspiration engaged!

Scuttle Town
Rave in the Grave (“so Castlevania it hurts”)

Turns out Jake Kaufman is virt, a remixer I had been listening to and adored since at least 2005 off VGMix.com

Wait. That’s VGRemix.com, nevermind it says VGMix on the title. VGMix.com has just a… dog? WTF? Actually, the plot thickens: here’s an old bio of his from the same dog website last updated in 2007: http://jake.vgmix.com/

From his current bio at virt.rocks/bio: 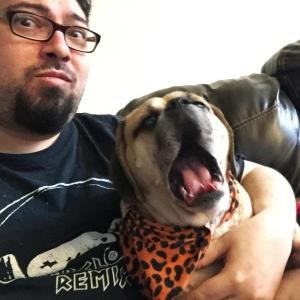 I am a large, awkward, soft-spoken nerd. I can compose 5 minutes of MIDI music in an hour from scratch, I can transform Street Fighter II music into smooth jazz, I can transform Final Fantasy music into Queen, and I can write for live orchestras. This is a questionable set of talents, and the fact that I can make a living this way is insane. Whatever, we live in the future.

My entire life has been spent obsessively working on music. I taught myself to sight-read notation, play piano, guitar and bass, mix and master, and program synthesizers and computers. As a teenager I became active in several online creative communities (including OCRemix and the PC Demoscene) where I developed the habit of freely sharing my music with anyone kind enough to listen. In addition to studying music theory, I also maintain strong interests in math, linguistics, computer graphics, and electronics. I enjoy learning more than anything else, so I read a lot.

The game industry has kept me gainfully employed for 15 years, as both an external freelancer and a full-time studio composer — usually both at the same time. Most recently, I was the audio director at WayForward, helping to build an audio department from the ground up. Although I’ve enjoyed complete autonomy and some huge opportunities there, I’ve recently decided to focus on diverse and challenging contract work as a free agent.

I live in Los Angeles with my adorable wife, Kris (a science major, Whovian, hardcore gamer, and anime nerd) and our incorrigible dog, Nugget (a beagle, pug, glutton, and unapologetic miscreant.)

Let me do a magic trick for you

Anyway, I remember virt from these here two AMAZING metal medleys from back when I was still in school—more than 10 years ago. Crystal Flash rocks out with Super Metroid’s OST and Blood of Ganon takes us back to the first three console Zeldas.

This man’s passion, creativity and CRAZY good work is a real inspiration for me. That’s what happens when you stick to what you enjoy making and turn your passion into your life’s work. Bravo sir, and thanks for all the tunes. I mean, just look at this, LOOK AT THIS! “A ridiculous amount of excellent free music” doesn’t begin to describe it.

One last thing: I have a key for Shantae and the Pirate’s Curse for 3DS from the Friends of Nintendo Bundle  I haven’t used because I already had the game. Whoever catches it first, please comment below to spare others the trouble of trying the code out, thanks. Enter the following code on the Nintendo eShop: B0LH4J1S1RC8FR4F