Language and the Pursuit of Happiness by Chalmers Brothers
My rating: 5 of 5 stars

If we are indeed made in the image and likeness of God (however we understand God to be), and if God’s word creates and generates, brings forth and manifests… why shouldn’t ours?

Let me tell you this first: I’ve read quite a number of self-development/philosophical books, but Langauge and the Pursuit of Happiness went from 0 to 100 and made it to my shortlist of self-development favourites with especially characteristic ease.

This book was first recommended to me and the rest of the participants as further reading after the conclusion of the Advanced Synergy training, or Choice, I had in Bulgaria in Sep. 2016.

Indeed, I recognised much of the ‘special vocabulary’ or ‘mantras’ used in this family of self-development trainings here:

Reading all this felt really comfortable to tell you the truth and took me to a similar space of self-deconstruction that Choice did, a program which I could tell from the very first minute would be life-changing. Going through Choice of course was unexpectedly tough and very much NOT comfortable, but the lasting effects on me have inevitably made me look back to it with tender feelings, and perhaps comparing the pleasant self-deconstruction I could go through on my own pace with this book to the slap in so many of levels of face that Choice was could be being a bit unfair to the latter. Anyway, the trainers at Choice admitted that this book had been very influential for them, and having read the book now, I can completely see why.

First off: “Language and the Pursuit of Happiness”, by Chalmers Brothers. The title of the book is so broad, one could very well think it impossible for the broadness and genericness of the subject matter to be satisfactorily conveyed. And Chalmers Brothers — is that a single person or is it THE Chalmers Brothers? I got some internal giggles from thinking about that, I admit.

Turns out: the subject matter is amazingly portrayed, and no, it’s a single person, actually a man without any background in psychology or anything, though with a lot of experience in leadership development, relationship-building, workplace culture and accountability workshops and such. This book was his first book, and I thought it was so clearly written, jargon-free and easy to read, I was almost shocked. That is to say: I was captivated. Mr. Brothers captured in written form a living example, or as much of a living example as a book can provide, of his own theory.

His theory is that, contrary to popular belief, language doesn’t just describe the world — it’s not just a tool used for communication. Instead, he proposes four more beneficial, certainly more powerful claims about language:

1. Human beings are linguistic beings. We “live in language.” All of us, all the time.

E.g. We make up a story about ourselves and the world, hold our stories to be the truth and forget that we made them up. We confuse the events themselves with our own explanations. “The minute I begin living as if my explanation of an event is the event… I stop listening”).

“Consider if someone walked into a crowded room full of people of many different ages and many different social and cultural backgrounds, and said “Well, I can see how all of you folks are obviously influenced by how you see things by your age, race, gender, life experiences… how your perceptions are necessarily “filtered” by your travel – or lack of travel – and upbringing, educational experiences, and so forth. I’m sorry you have to live with such obvious limitations… I, on the other hand, have been blessed with Cosmic Objectivity! Somehow I was born with the capacity to see things as they truly, really, objectively are… yes, I’ve been blessed with privileged access to the Truth… how excellent it is for me to have such unfettered access to the way things really are!

2. Language is generative and creative (vs. passive and descriptive).

I.e. our conversations with other people is what creates relationships with them. Change the content, change the relationship. Also, through what we say (and by extension, what we do), we create a public profile for ourselves, most of which is impossible to be conscious of — although certain substances can make it slightly less impossible. Or so they say. 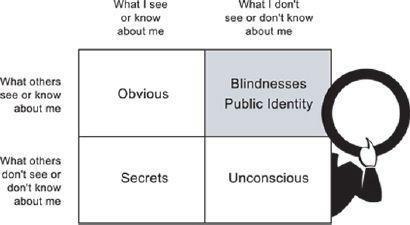 And despite how most of us lead most of our lives — that is, not living in honesty — Mr. Brothers asks:

“Do you have anyone in your life who will give you ‘the straight poop?’ That is, someone who will share with you their honest impressions about you and your actions and their impact on others. Is this a valuable person to have in your life? Most of us say, yes indeed…”

3. Language is action. To speak is to act.

“If I make a request, and you say Yes, we’ve got a promise. If I make an offer, and you say Yes, same thing. And with this promise, tomorrow is different. Today is different. We have just put in motion events and actions that would not have been put in place had we not spoken, had we not make that agreement… The key interpretation we offer is that for humans, for us, our language is how we coordinate the coordination of action.”

4. With language, we make visible that which was previously invisible.

“Let’s say last night I walked outside of my home and it was a beautiful, clear night. I looked up and saw “a bunch of stars”. That’s what I saw when I looked into the sky… a bunch of stars. Let’s say that this morning I had a conversation with my good friend Les, who happens to be an amateur astronomer. Les has this book and he says “Chalmers, some of what you’re seeing up there are actually planets… they have a different look and they shine in a pale red or yellow tone… and some of what’s up there are called nebulae, which are the remnants of huge explosions of stars millions of years ago… there’s a cloudy edge of gas formations… also, there are man-made satellites, which have a different look still and actually can be seen to move, slowly, across the sky…

“Now, tonight, when I go out and look up at the night sky, what do you think I might see? Last night I saw “a bunch of stars” and the sky is the same, and tonight, when I look up, what might I see? That’s right… I might see some planets… some nebula… some satellites. Question: Where were the planets, for me, last night? Where were the nebula, for me? Last night, they didn’t exist – for me. They were out of my awareness, and tonight I see them. My world has changed. My possibilities have changed. Planets… nebula… and satellites are linguistic distinctions, in the domain of astronomy, that I acquired in my time with Les. And once I acquired them – once I learned them – I opened my eyes upon the same world, and I saw something new. I became a different observer. I saw what I didn’t see before, and this is a powerful phenomenon to begin to notice!”

I’ll give you a very quick run-down of the chapters so together with all the aforementioned you can more or less get a feel for how the rest of the book goes:

Apart from the crystal clarity of the book, I loved how most of the chapters had a Summary: Main Points and New Interpretations and a How-To: Possibilities for Taking New Action sub-section. It really makes it much easier to skim through the book again and revise everything I learned so that it sticks better. Mindful repetition is an important learning tool (perhaps THE most important), after all.

I’ve written a lot already. I’m just so excited that I discovered this book and would like to share it or even discuss it with other people. I think it has a very powerful and extraordinarily well-articulated message (a combination which is surprisingly hard to find) and I believe that many more people could benefit from discovering it, reading it and making it one of their own new favourite books, too.

And if you prefer videos over lengthy summaries, here’s Mr. Brothers speaking at TEDxBocaRaton in 2014 about “How language generates your world and mine” — a great summary for the book if this review of mine has once again inadvertently slipped into TL;DR territory. In which case, that’d be in my blind spot/public image quadrant, so would you give me the ‘straight poop’ and let me know? Thanks!

Oh, and remember: making the powerful declaration that you don’t know, and that you’re a beginner in something, will get you far. 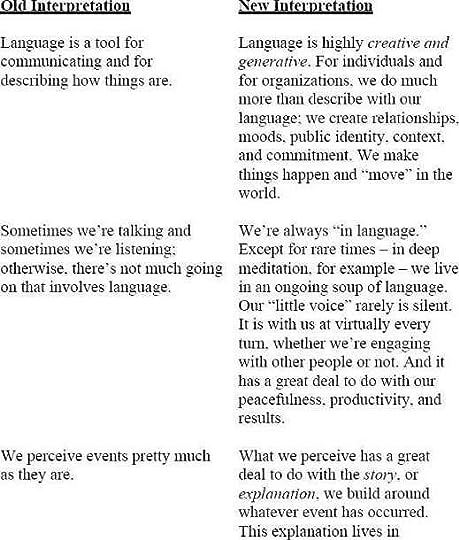 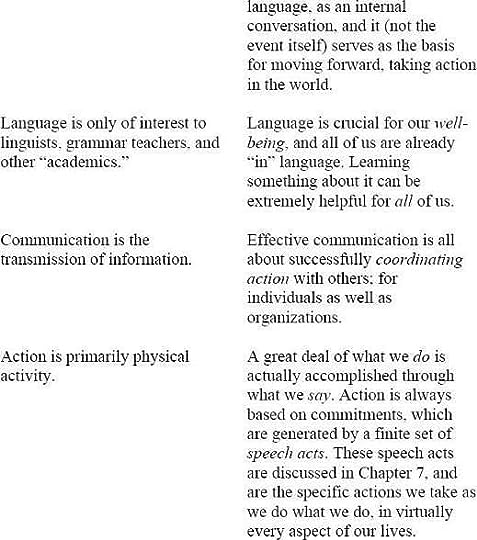